USA UN ambassador Nikki Haley shows her anger at the UN vote that went against the USA: https://www.youtube.com/watch?v=EYkrjW7QlDs, around 1 minute.

Nikki Haley says in the above video, "The United States will remember this day in which it was singled out for attack in the General Assembly for the very act of exercising our right as a sovereign nation. We will remember it when we are called upon to once again make the world's largest contribution to the United Nations. And we will remember it when so many countries come calling on us, as they so often do, to pay even more and to use our influence for their benefit. America will put our embassy in Jerusalem. That is what the American people want us to do and it is the right thing to do. No vote in the United Nations will make any difference on that. But this vote will make a difference on how Americans look at the UN and how we look at countries who disrespect us in the UN. And this vote will be remembered. Thank you."

Very frank words from the ambassador. So I thought I should also provide my very UNIMPORTANT :-) but frank opinion as a global citizen.

Hmm. This to me seems like: My way or the Highway! Either you are with us or you are against us!

I think the Trump administration should be more gracious of the protest made by 128 nations of the UN with only 9 nations (including USA) voting against this protest. The nations that supported USA and Israel on this matter were these 7 nations: Guatemala, Honduras, Togo, the Marshall Islands, the Federated States of Micronesia, Nauru and Palau.

All the other nations of the 193 member United Nations either voted for the protest (against USA decision to move capital to Jerusalem) - 128 nations, or abstained - 35, or absented themselves for the vote - 21. Does that not send some message about world opinion to the Trump administration? I mean, NATO allies of USA like Britain and France voted for the protest!

As an Indian citizen my view is that if USA presidential administration wants to take any action against India for this vote that India made, let them do what they want. India should not lose its free will, democratic principles, ethical principles and dignity in the face of USA threats like this to most of the nations of the world who have disagreed with the USA on their Jerusalem related decision.

A mail response from a respected elder USA based correspondent where he said that he agrees with my (above) view and that "this [Trump presidential administration] too shall pass. —the sooner the better", helped me to cool down and get a more balanced perspective. I thanked him for his response.

One point that I would like to add is that readers and I should realize that this Trump administration is a rather unusual presidential administration in the USA which has taken such an aggressive and almost unilateral approach to a super-sensitive international matter like status of Jerusalem. I don't think regular/establishment Democratic party view or regular/establishment Republican party view in the USA would approve of such an approach to Jerusalem which is so dismissive of world opinion. I mean, I don't think either President George W. Bush [Republican] or President Barrack Obama [Democrat] would have acted in this manner.

I think I need to also say that as I am a God and religion crazy guy, I view Jerusalem with a lot of piety and reverence. This city has played a significant role not only in Judaism and Christianity but also in Islam over centuries and millennia. Further, it is an Asian city with me as an Asian knowing how important religion and God (as viewed through religion typically) are to Asians. For most Asians excluding, but only after mid 20th century, communist China and North Korea, and including, I am quite sure, most residents of Jerusalem today, whether Jewish or Christian or Muslim, religion is a vital part of life. For these Asian believers in God and religion, without religion life loses a lot of meaning, and becomes a rather empty life.

Given this vital religious significance of Jerusalem for three major world religions, disputes about it in our 21st century today should not be resolved via force but via negotiations. The USA being the primary supporter of Israel and the most powerful country in the world both militarily and economy wise, has a crucial role to play in resolving such disputes. Therefore actions that USA's Trump presidential administration takes like recognition of Jerusalem as capital of Israel have to be viewed as actions that impact Jerusalem in a big way far beyond Israel-USA bilateral ties. So my humble view is that Mr. Trump and his administration team should act in a more responsible way that respects at least the views of its own decades-long allies like Britain, France, Germany and Japan (voted for the resolution against USA decision) and Canada and Australia (abstained or was absent).
-----------------------

This tweet has a pic showing the name of the country and whether it voted for the resolution (green), against (red), abstained (yellow), or was absent (black background): https://twitter.com/NBCNews/status/943895292138741760/photo/1.

I have reproduced below the pic in the above tweet (courtesy: United Nations and NBCNews): 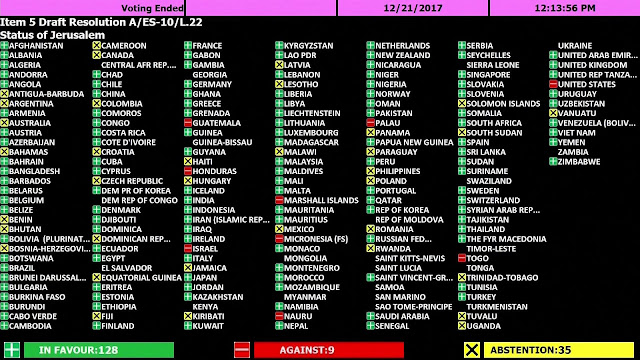 Given below is my comment (slightly edited) from my Facebook post, https://www.facebook.com/ravi.s.iyer.7/posts/2042626782620555, associated with this blog post, which was made in response to a comment that asked whether we can view Trump’s decision as a first step to bring closure to a long dispute:

My view is that consensus, at least significant number of countries' support, is the way forward on this highly sensitive matter which has resulted in great amount of bloodshed and hatred in the past decades. Trump seems to be NOT bothered about world opinion. Further, he is openly threatening countries who voted to censure the USA decision! This I think is unheard of in UN history, at least in the past few decades.
-----