I have given below some extracts from the post : 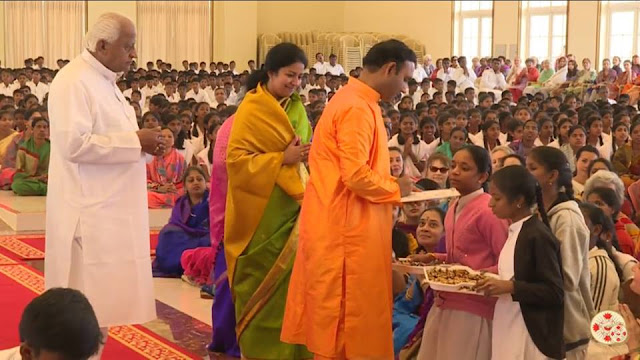 [Above pic shows Madhusudan Rao Naidu in an orange dress with B.N. Narasimhamurthy behind him in a white dress.]

Cunning man [B.N. Narasimhamurthy referred to as BNM] he is, for this, he chose two most strong and important weapons; First is Swami Himself, His name and second His dear students. BNM is using Swami's name, Swami's pictures and Swami's students to destroy Sai mission. He had a deep urge to become a pontiff of a MUTT (ashram) and revel in the adorations of devotees who will be falling at his feet while he could sit on the throne of a Guru. BNM is fulfilling all his desires by using Swami's name and Swami's students.
...
After Mahasamadhi, Narasimha Murthy started taking Madhusudan to individual devotees' houses and introduced him. Madhusudan used to appear very humble, bowing down and touching the feet of devotees with vibhuthi on his forehead putting up a face of an innocent Sai student, started transmiting messages which were supposedly given by Bhagawan. Many devotees who were completely under shock due to Swami's Mahasamadhi started to believe him as he was referred and brought in by none other than BNM who was at Swami's feet for more than 30 years. The initial belief was more on BNM than Madhusudan. Both these crooks encashed the traumatic situation which prevailed immediately after Mahasamadhi, started to exploit devotees who had feeling of emptiness in their hearts.

Slowly things changed and devotees started going to Madhusudan as he was relaying the message of Swami in SUBTLE BODY. Initially he was only hearing the messages and relaying as was claimed. Slowly, he started giving darshans, accepting letters, calling devotees for interviews, producing vibhuthi, rings and chains and finally ended up in taking out lingam too on Shivarathri 2017.
...
Now the SUBTLE SWAMI seems to have merged into the gross body of Madhusudan and he is posing himself to be a Swami. Now the drama has reached its peak and he is imitating Bhagawan even in the dress by wearing those colours which Bhagawan used to wear. Here are some obnoxious pictures where you can really see the chameleon in new colours starting from a flamboyant looking attire to sober Sai Student safari dress later to kurta pyjama and then the colour changes and also the length of his kurta gets longer and longer.

[Only one such pic is given below. For other pics please visit the Facebook post given earlier.] 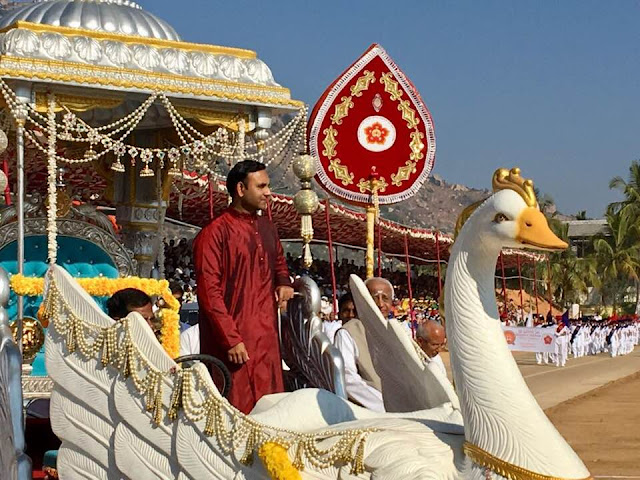 Dear devotees a man [Madhusudan Rao Naidu] who was getting ready for marriage, then starts bizarre claims of listening Swami's voice, then to seeing Swami , imitating His voice, His walk, changing the dress colours and who knows what else we will be seeing. Be aware[.] Don't be deluded by these fraudsters. Dear brothers and sisters, for Swami’s sake, let us all unite and show our love and tribute to Bhagawan by completely shunning these fraud individuals operating from Muddenahalli.

Ravi: I think it is the mega ego and megalomania of Shri B.N. Narasimhamurthy that has created such a horrific division in the Sathya Sai fraternity ***worldwide***. He is the main culprit even if in public he now appears to stand or walk behind Madhusudan and act as an elderly helper to Madhusudan. I am quite sure that in private he will dominate over Madhusudan and order him around! What a pity that such an atrocious drama using Swami's name and Swami's students has fooled so many thousands of people worldwide including cricket icons of India - Sachin Tendulkar and Sunil Gavaskar.

I do hope and pray that the Hon'ble Chief Minister of Maharashatra Shri Devendra Fadnavis, https://en.wikipedia.org/wiki/Devendra_Fadnavis, does not get trapped by this dangerous duo of Narasimhamurthy and Madhusudan Naidu who are misusing the HOLY NAME of Bhagavan Sri Sathya Sai Baba.
Posted by Ravi S. Iyer at 5:28 PM