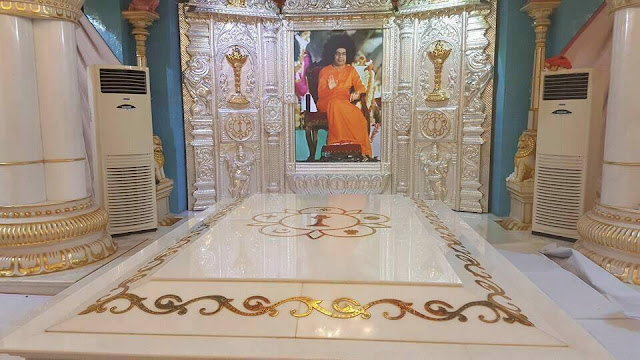 Above picture is of the samadhi of Bhagavan Sri Sathya Sai Baba in Sai Kulwant Hall, Prasanthi Nilayam (Puttaparthi), with recently added gold Sarva Dharma symbol and ornamental engravings. Pic courtesy: Anand Raghupathy, Facebook user. His post has been Facebook-shared by me here: https://www.facebook.com/ravi.s.iyer.7/posts/1733968976819672, dated April 26th 2016. The share has a few more pics of the gold engravings.

The Sarva Dharma (All Religions) symbol (logo) is explained in detail on the Sri Sathya Sai Central Trust (SSSCT) website Unity of Faiths page, http://www.srisathyasai.org.in/pages/his_teachings/Unity_of_Faiths.htm. The logo is shown on the top left of the page. 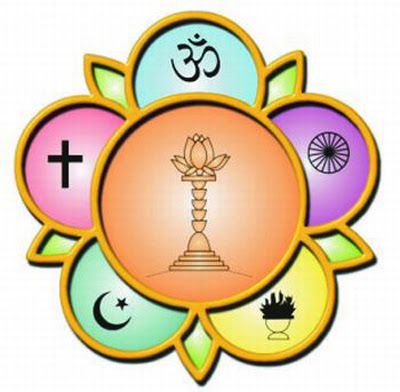 Sai Das wrote:
I think Swami would be much better pleased if we were working hard on making our hearts gold.
---

S Ramanan Rao wrote (slightly edited):
Sai Das, We are giving him back what Swami has bestowed on the devotees. It is the "Bhava" that is offered here, and we don't see Metal. You can offer any thing to the lord that includes the Heart.. and Lord is Bhava Priya will accept anything - once you offer anything to him with LOVE.
---

Sai Das wrote:
I didn't say or even mean to imply that this shouldn't be done brother, rather, that Swami doesn't care about that sort of thing; He does, however, care about us having hearts of gold. :-)
---

S Ramanan Rao wrote (slightly edited):
Sorry Sai Das, that was not intended to hurt your feelings. I recall an experience as narrated/shared by the Devotee couple themselves way back in 2000, when i used to live in Dombivli, Dt. Thane of Maharastra. The couple loved Swami so much that they used to save money from their salary and with Lots of Love they would buy Gold Buttons for Swamis Robe. Swami knows the intention (Bhava) of the devotee, wherever they are. The couple after buying the Gold Buttons would travel to Prasanthi Nilayam (PN), to offer the same to the Lord. The Lord used to take those Buttons with a beautiful smile and Love and used those buttons for His Robe. The couple are now settled at PN and offer their Free voluntary service to the Lord. I feel the Lord is for everyone. He doesn't discriminate. I will also share one more experience of an aged lady -devotee of swami ( the incidence took place in late 1980's) which is quite opposite to this..
----

Sai Das wrote (slightly edited):
I understand about the bhava behind and offering but then anything can be offered with loving bhava, no? Personally, I think external offerings are good initially but ultimately, inner offerings are all that really matter. heart emoticon
---

S Ramanan Rao wrote (slightly edited):
The story of an aged lady, (as shared by the Alumni students recently in a satsang took place in Bangalore) who used to travel to PN from interior part of Vijayawada, AP. She did not have anybody but had a small land (field), where she used to grow Peanuts. That was her only source of income - by selling peanuts she was making some money.. Once a year she would come to PN with a Bag full of Peanuts to offer Swami but she will be seated last in the Kulwant hall. She used to think whether swami shall accept this small offering from her. She used to also look at things happening in the center stage of Sai Kulwant Hall and be amazed by the way foreign devotees were offering many precious things to Swami. But Swami knows the Heart of the Devotee. Swami used to walk all the way to the last row and Pick up the Bag and Bless the lady, whenever she would make a visit to PN. The lady always shed tears for the Love that Swami showered on her. Not only that. Swami after giving Darshan and Interviews, would call a bunch of boys in Poorna Chandra residence, and ask them to open the 'Not-so-good-looking Bag' and share the peanuts with the students explaining the Devotion of that Lady. Swami sometimes never bothered that the shells of the peanuts spilt all over his robe and around his chair. The students with rapt attention would eagerly listen to the Love-Story from Swami Himself. Swami would say, Ayyo Papam, that lady come from so far, and She has only One Bag with her to fill the Peanuts, and (so) I should return that Bag to her!. The same evening again Swami will send the Bag, through someone, back to the Lady. Love is the Mantra.. and One can reach to Him, by developing the same.
---

S Ramanan Rao wrote:
He cares for everything as long we offer them with Love. He doesn't discriminate material or non material things..is what I wanted to convey...
---

S Ramanan Rao wrote (slightly edited):
Yes. True. Material offerings erode over a period of time and then it becomes matured as an internal offering. But doesn't completely go till our last breath?
---

Ravi S. Iyer wrote (slightly edited):
Thanks for your comments brothers S Ramanan Rao and Sai Das. May I share your comments on my FREE spiritual blog?

These comments reminded me of Sep. 22nd 1997 when Bhagavan rode the golden chariot the first time (in public, at least). You can see the associated video here: http://www.saicast.org/1997/19970922_DD.htm. I was doing Seva Dal duty in Sai Kulwant Hall then as part of Maharashtra Seva Dal group (I was living in Dombivli, Maharashtra then) and recall the exhilaration as well as the mad rush of people wanting to see Swami riding the golden chariot then. I was fortunate to have a thrilling and clear view of Swami coming in the golden chariot from the South Indian Canteen road towards the main entrance into Kulwant Hall for Swami's car/vehicle (DashaAvatar Gate is the name, if I recall correctly).

I plan to put up a separate blog post on this event. But here I would like to say that on the one hand I enjoyed the exhilaration of seeing Swami in the golden chariot which was said to be predicted in the Naadi records of ancient Rishis (ancient prediction-records of Indian seers). Very importantly, at least one of the Naadi records, people said, mentioned that those who had darshan of Swami in this golden chariot on that day, would not have a re-birth! So that made the event even more exhilarating to me and many other devotees assembled there.

But, on the other hand, after the thrill subsided, I also had a doubt about whether such a golden chariot was an example of extravagance. Bhagavan answered that query in his discourse that day itself, if I recall correctly. He said that he does not like such expensive chariots and that he agreed to ride the golden chariot only because of the love and devotion of the devotees who prayed to him to ride it.

Later, after I had spent living some years in Puttaparthi and having regular darshan of Swami in Sai Kulwant Hall, and being in the Sai university circle of teachers & students, I understood that what really mattered to Bhagavan in such cases, was the giving of joy to his devotees. His joy was the joy of his devotees! If his devotees wanted to have the great joy of seeing their LORD and MASTER as a king (Maharaj is the Indian languages' word) riding a golden chariot for a few minutes, he was willing to do that for them and their joy. As simple as that, and as profoundly meaningful as that!

Sai Das wrote:
Ravi S. Iyer You have my blanket permission to repost anything I post publicly at any time. :-)

I think that a pursuing conversation would ultimately and in short, lead to being a matter of one's intention and not much different from a conversation regarding advaita vs. bhakti. If one has a pure heart, then any offering made will be pure and pleasing. I think outward offerings can perhaps help purify ones heart by reducing the ego via love.

Most of us are aware of the trap that external displays and attention can and does lead to if the inner isn't sufficiently developed. A Swami friend once said to me in half jest that most churches/temples were built from guilty consciousnesses. :-)
---

Ravi S. Iyer wrote (slightly edited):
Noted your blanket permission grant to me, bro. Sai Das. Thank you very much. "A Swami friend once said to me in half jest that most churches/temples were built from guilty consciousnesses." Very interesting! I can't but help recall Mario Puzo, author of the Godfather book, putting out this quote supposedly from Balzac, "Behind every great fortune there is a crime." .... The story of saints is replete with great transformations from criminal/killer/opponent to saint! The names that immediately spring to mind are Valmiki, the author of the Ramayana, who got transformed from a hunter to a Sage/Rishi, and of Saul of Tarsus, student of Gamaliel of Jerusalem, who got transformed from a persecutor of the early Christians of Jerusalem to Saint Paul, a great apostle of Christianity, and one of the main founders of Roman Catholic Church.
---

Sai Das wrote:
From the Godfather to Valmiki. That's quite a span! Good work there 'ole boy! :-)
---

S Ramanan Rao wrote:
Sai Das, I believe Bhakti is part of Advaita. Its not against. Pure Advaitic personality or say Born Advatis like Sukha Maharishi - Son of Veda Vyas, wanted to dwell in Bhakti Rasa of Krishna. (He who wrote Bhagavatham). I recall Swamis Message here: I separated my self (Advaita yo Dwaita) from Myself to Love Myself!
---

Sai Das wrote:
I like to think of it as bhakti and advaita being two sides of the same coin. :-)
---

[I thank Anand Raghupathy, S. Ramanan Rao, Sai Das and saiprema.files.wordpress.com and have presumed that they will not have any objections to me sharing their above comments/ images from their websites on this post which is freely viewable by all, and does not have any financial profit motive whatsoever.]
Posted by Ravi S. Iyer at 11:36 PM