Dombivli (E) Hanuman Mandir: Fond memories of it as Sathya Sai samithi would have Thursday bhajans there 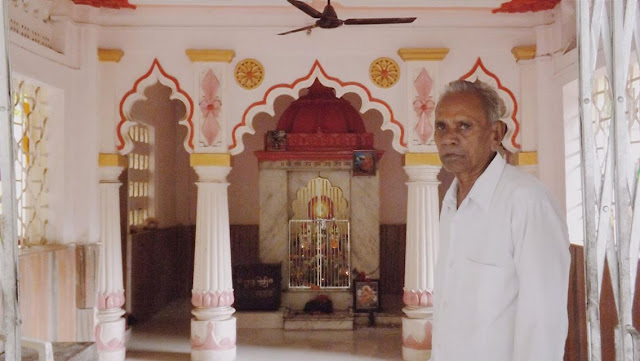 "My dad left me forever when I was just eight years old.Being the lone child, I started working in order to support my mother. Despite that, I never stopped my education.Toiling hard for many years, facing extreme hardships I somehow educated myself till 11th standard.After that I joined the police force and worked there for 34 years."

"Any regrets that you have?"

"Despite working for so many years I still do not have a house of my own in Mumbai. Monthly salary of five thousand was hardly sufficient to feed my wife and five children, and whatever savings I had were spent on education and marriage of my kids."

"So how do you spend your time now?"

"I am a care taker of this temple. Looking after this place takes most of my time. I do it more out of devotion than any necessity. It has been a long and a busy life, its time I get some some peace and happiness."

Humans of Dombivli Facebook user: He is a care taker of Ram mandir, near dombivli station (east) :-).
[Ravi update: It is Hanuman mandir, not Ram mandir. See comments below for more details.]

Ravi S. Iyer Facebook comment: This seems to be the same temple (within the police station complex, Dombivli (E), near Rly. Stn.) where we members of Sathya Sai samithi of Dombivli, used to have bhajans every Thursday evening. In the second half of the 90s and early 2000s (before I moved to Puttaparthi) I used to be a regular participant in these bhajans (not lead singing; just chorus). I have very clear and very fond devotional memories of this temple and circumambulating Lord Ram and other deities.

To the gentleman: Thank you sir for your wonderful service of taking care of this temple. I pray to Lord Ram to take care of you and the temple.

Ravi S. Iyer commented:
Humans of Dombivli: A mail correspondent with whom I shared this Facebook post (via my blog post) who, like me, was living in Dombivli, in the past (but now lives in Bangalore) wrote: "If I remember right, the temple in Police station compound is Hanuman Mandir. Ram Mandir is on the road perpendicular to the railway line almost towards the end of the road just before the T junction."

I think he is right. So the temple very close to Dombivli (E) Rly. Stn. on Rajaji path, within police station compound, is Hanuman Mandir, which also, naturally, has an idol of Ram as well, with Hanuman being in servant (Das) position (if I recall correctly).

Further, I think the photo put up on this Facebook post is of this Hanuman mandir within police station complex, Rajaji Path, Dombivli (E) (near Rly. Stn.).

Humans of Dombivli responded:
Yes, we made a mistake.
It is called Hanuman mandir :-).
But we have heard people referring it as Ram mandir too.
---

Ravi: Thanks to the mail correspondent who pointed out the mistake.

Dombivli / Dombivali is an important city in Kalyan-Dombivli twin city of Thane district in the Mumbai Metropolitan Region,belonging to Kalyan taluka.
...
It is located about 50 km from Mumbai.
...
The population of the twin city of Kalyan-Dombivli at the 2011 Census counted to 1,246,381 (52% males and 48% females).
...
The town is one of the densely populated places.it is also among one of most literate suburbs of mumbai city.

Ravi: During the years I spent there, from around 1980 to 2002, with a few years in between spent elsewhere, my view of Dombivli then is that it was a working class and quite affordable town (as compared to Bombay/Mumbai proper) with many people commuting to Bombay/Mumbai from Dombivli (by suburban railway trains, which were pretty crowded during rush hours). Dombivli falls in Thane district of Maharashtra. The natives of Dombivli are called Agris.

From https://en.wikipedia.org/wiki/Agri_people:
The Agri people (Sanskrit/Marathi/Hindi: आग्री ) are historically an Indo-Aryan ethnic group native to the Mumbai , Raigad , Thane, Nashik, Ratnagiri Districts and the suburban area of Mumbai in Maharashtra.
..
The Agri people are traditionally salt-makers but now settled in Agriculture and Fishing, Real Estates ,Business.
..
They speak a dialect of Agri, a form of Konkani with Marathi influences. They use the Devanagari script.
They worship all Hindu gods, particularly Khandoba, Bhairoba and also Goddess Ekvira situated at Karla mountains in Lonavla.
..
Each village has a god or goddess and each family has a god or goddess of the kulas e.g. Khanderao for Dhumals, Bhavani or Shiva for the Bhoirs, etc.
No dowry is observed strictly in this community. Giving of dowry as well as acceptance of dowry both are considered to be taboo.

During my years in Dombivli, like our family, there were many settlers in Dombivli from outside, coming from various parts of India, like in the case of cosmopolitan Bombay. However, Dombivli being more working class, typically had a lot more conservative approach to life as compared to Bombay/Mumbai. In particular, there were (and I guess that continues today) many Hindu temples in Dombivli as well as groups following various Hindu or mutli-faith Gurus, with a vibrant devotional atmosphere though that was predominantly a Hindu devotional atmosphere, during my years in Dombivli.

[Humans of Dombivli Facebook user has provided me their OK for sharing their image and text of above mentioned Facebook post, on this blog post which is freely viewable by all, and does not have any financial profit motive whatsoever.]
Posted by Ravi S. Iyer at 6:37 PM