Warning: Readers who cannot handle such violence related matter should skip reading the rest of this post.

A small extract from the article:

Prosecutors released the 216-page, heavily redacted transcript of Cruz's post-shooting statement after a judge ruled last month that nonconfession portions should be made public. The interrogation began about four hours after the Feb. 14 shooting at Marjory Stoneman Douglas High School in Parkland and about 2½ hours after Cruz was captured as he walked down a nearby street.
--- end extract from cbsnews.com article ---

The above article shares this link to the redacted 216 (217) page transcript of the police interrogation of Nikolas Cruz: https://drive.google.com/file/d/1ZXfEXtX-FcWHKeILL1OYE-3wPJd0GHn2/view?usp=sharing. As per the above extract, the confession part of the transcript (and video) is redacted (blackened out/cut).

Today I finished reading most of the non-redacted parts of the 217 page transcript whose link is provided above.

I am very disturbed and very shocked to have got a close-up glimpse, even with the confession part of the shooting being redacted, of the mind of 19 year old Nikolas Cruz who shot and killed 17 students and staff and injured 17 others in Stoneman Douglas High School in Parkland, Florida, USA on 14th February 2018, https://en.wikipedia.org/wiki/Stoneman_Douglas_High_School_shooting.

Cruz said he had a demon voice in his head which was telling him to do bad things over many years! Cruz was lonely and felt rejected by people. He was adopted by a couple. His adoptive father died when Cruz was very young and his adoptive mother died in November 2017. He said he tried to kill himself twice. He tried to cut himself. He was taking narcotic drugs like Marijuana and Xanax from the street (not under medical advice/prescription).

This guy worked as a cashier and got paid over a thousand US Dollars a month. His late mother's money was also accessible to him.

Cruz said that he bought an AR-15, an AK 47, three shotguns .. and kept all of them in a safe. All of these purchases, according to him, were legal purchases and not from the street! He said he bought the guns for protection. He also said that the demon voice told him to buy the guns.

In the transcript, one reads that Cruz says aloud that he wants to die / kill himself, when he is alone in the room.

What a terrible and very dangerous mental state - dangerous for both himself and society - this 19 year old young man was in! Once you combine that with access to killing machines like an AR-15 or AK-47 type of rifle, what else can you expect but terrible killing and terrible tragedy!

But there was some light at the end of the transcript which records the conversation between Nikolas Cruz and his younger brother Zack Cruz. Zack tells him that he loves him despite the horrible thing that he did and tells him:  "Try to find God because God is good"! I have attached two screenshots about this light at the end of this very dark, disturbing and depressing transcript.
--- end FB post contents ---

Pics mentioned in above post contents are given below: 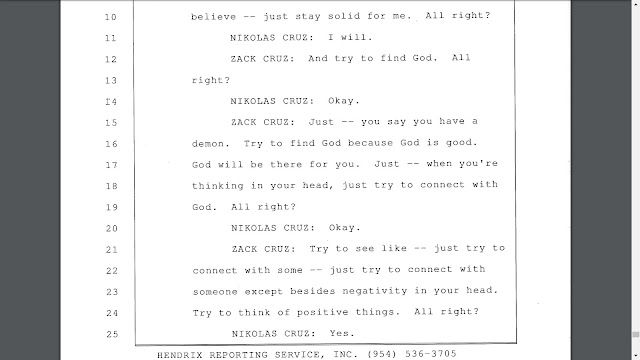 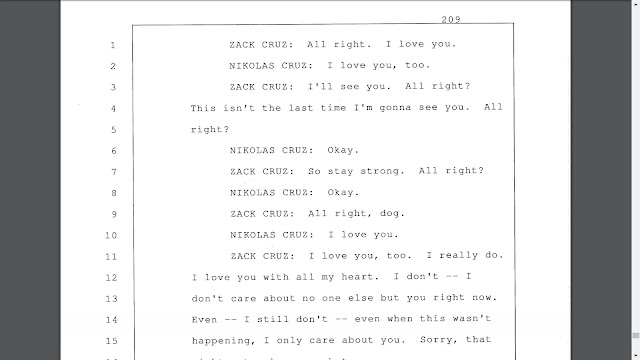 I admire the US law enforcement and justice system. I am not saying its perfect but they sure do try to bring in a great level of transparency in their work, as compared to what I have seen in India.

I have watched about half an hour of the video as part of my effort to understand some harsh realities of life.

Hats off to the concerned US law enforcement and justice office for this level of transparency.

I am getting some idea about this young man who very, very unfortunately became a mass killer.

I think one way to reduce such mass shootings is by understanding the mindset of such killers and try to prevent, to the extent possible, such mindsets from getting formed. Of course, reducing access to guns for such people is another but that's a matter of huge debate in the USA.
----

Given below are my comments on above FB post:

Cruz says he fought with a kid at school over the kid talking to Cruz's girlfriend. The fight led to both kids getting suspended. Cruz felt embarrassed as the other kid had got the better of him in the fight.

Not sure of this but I think it is something on these lines: Cruz got depressed and so was not going to school. ... The school transferred him and he was upset with the school for that.
---

Cruz bought the AR-15 as he thought the gun was cool and that it would make him safe.
---

Cruz talks of demons. He says he hears voices and that these voices have been going on for years.

Cruz says the voices tell him to burn, kill, destroy.
---

Hmm. This is getting into frightening territory. So I think I should stop my notes-comments here.
---

[I thank cbsnews.com and the state of Florida, USA and have presumed that they will not have any objections to me sharing the above small extract from their article (cbsnews.com) and above two screenshots of transcript of police interrogation (state of Florida, USA), on this post which is freely viewable by all, and does not have any financial profit motive whatsoever.]
Posted by Ravi S. Iyer at 11:47 AM