Brother Sai Keshav who believes in Madhusudan Rao Naidu's so called communicator claim put up a Facebook post, https://www.facebook.com/saikeshav.personal/posts/1467032750006763, on Feb. 9th 2017. This post has pics of a Nigerian police report dated 10th Jan. 2017 on investigation of charges against Muddenahalli group leaders in a visit they made to Nigeria last year. I have given those pics (two) below. 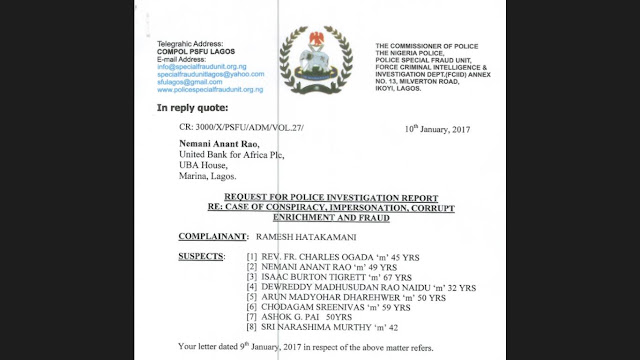 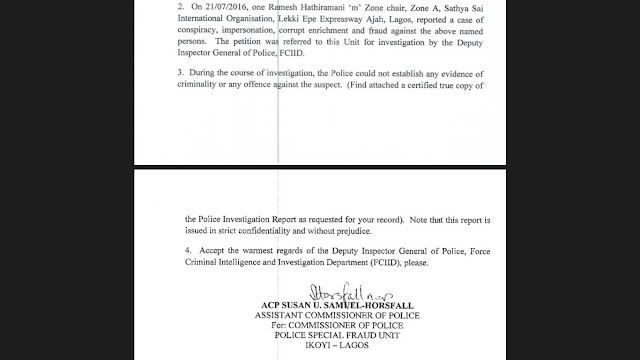 I think this shows the Nigerian police investigation's current view that they have not found any evidence of criminality against Muddenahalli group leaders mentioned (including Madhusudan Rao Naidu, Sri Narasimha Murthy, Mr. Isaac Tigrett and Sri C. Srinivas). So I take this to be a clearing up of their names from the criminal allegations. I congratulate Madhusudan Rao Naidu, Sri B.N. Narasimha Murthy, Mr. Isaac Tigrett and Sri C. Srinivas, and others named above, on being absolved of these criminal charges by Nigerian police investigation. I am also sorry that they had to go through the process of having such allegations about them which took some time to get cleared. 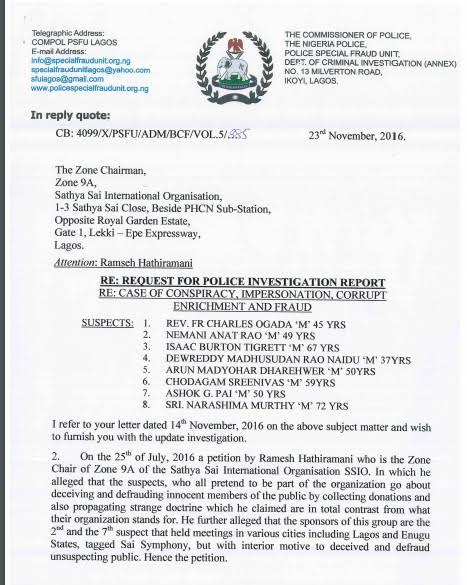 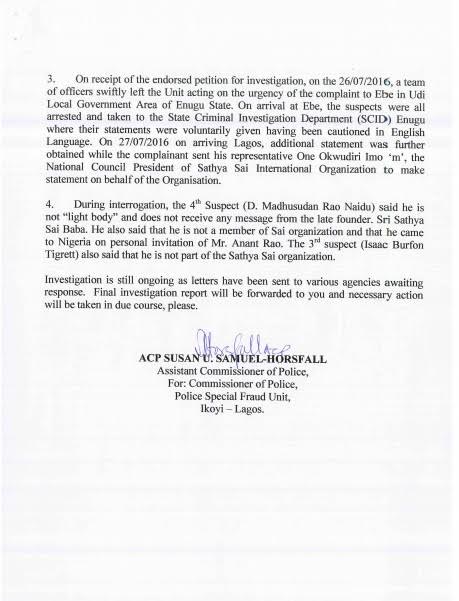 I would like to reproduce in text here, the first sentence of point 4 of this 23rd Nov. 2016 Nigerian police report. "During interrogation, the 4th suspect (D. Madhusudan Rao Naidu) said he is not "light body" and does not receive any message from the late founder, Sri Sathya Sai Baba".

So this statement of the Nigerian police STAYS ON NIGERIAN POLICE RECORD.

So I think I should restate my stand that a legal challenge, as a CIVIL lawsuit (not a CRIMINAL one), should be made against Madhusudan Rao Naidu's claim of being a so-called communicator of Bhagavan Sri Sathya Sai Baba, with an objective of restraining Madhusudan Rao Naidu from making that claim (which I view as a FALSE CLAIM and have documented my reasons for that quite extensively on my blog and Facebook posts). In a recent Facebook comment (also put up as part of a Facebook post), I have suggested such a legal challenge being made in USA court of law.

I would also suggest to Nigerian and Africa Sai orgn. to do the same in Nigeria.

This approach is a non-violent and fair way, in my considered opinion, of seeking the view of the courts of law in various countries about the claim of so called communicator, Madhusudan Rao Naidu (which I view as a FALSE CLAIM).
Posted by Ravi S. Iyer at 12:42 AM