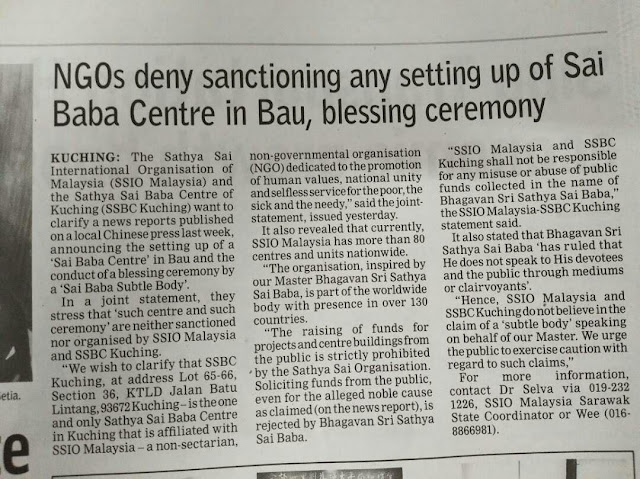 Very good to see this Malaysian press article explaining the proper stand of Malaysia Sai orgn. letting people know that so called 'subtle body' is NOT endorsed or supported by official Sai orgn. Further, the public has also been warned about possible abuse/misuse of such funds by the 'subtle body' group.

About Borneo Post from its wiki page, https://en.wikipedia.org/wiki/The_Borneo_Post : "The Borneo Post, established in 1978, is the largest and widest read English newspaper daily in East Malaysia."

An additional comment of mine that I used as forwarding comment to a correspondent (slightly edited):
It has been an interesting learning experience for me about how a false claim spiritual group, in this case the so called 'subtle body'/communicator of Sathya Sai Baba group, rises meteorically to fame, money and power, but then slowly and steadily its false claim gets exposed despite threats and intimidation tactics they try to silence the persons doing the exposes.

The above post shows how an East Malaysian English language newspaper carried the statements of the official Malaysia Sathya Sai orgn. clearly stating that Sathya Sai Baba did not endorse/support any medium/communicator claims and warning the public about possible misuse/abuse of funds by the 'subtle body' group.

On a Facebook post of a Malaysian Sai devotee who seems to have many followers, if I recall correctly, I read that this press article in the Borneo Post was in response to an article or maybe it was an advertisement in a Chinese language newspaper in that region of Malaysia that promoted the so called 'subtle body' group.

I (Ravi) responded: Vr Ganti sir, Many people in Parthi have complained about my long articles and mails in the past, including former vice-chancellor Sashidhara Prasad when in May-June 2012, I brought to his notice the Shakuni poison and criminal action of some administrators of the Sai university against me :-). Rather than read the full and well documented matter, he chose to fail in his duty as vice-chancellor and wrote me back that he does not have time to read long mails and accused me instead of spreading poisonous venom! Ha! Ha! What an Asathya-Adharma crook that fellow was! Anyway, later I learned that he nearly got put in jail due to some allegedly criminal actions of his as VC of Mysore university and was saved by political support as the governor of Karnataka intervened to prevent a police case being filed against him by his successor VC. Sri Talwar was the name of the successor VC of Mysore university, if I recall correctly. [Other readers who want to know more about my issues with Sashidhara Prasad and other Sai university administrators may visit this blog post of mine: http://ravisiyer.blogspot.in/2015/11/my-may-2012-service-record-record.html]

And I do not get bothered in the least if some readers don't have the time and/or inclination to read these long posts and comments. It is their choice and they are fully entitled to ignore my long posts and long comments, or even ignore my short posts and short comments :-). Jai Sairam!
----

Saithra Leilani wrote:
I enjoy to read all your postings. You just need a handful of people who understands you. And Whoever is practicing Adharma and Asathyam to fulfil their self interest has to face the consequences no matter what as the truth will always surface in it's own timing but surely. Expressing clearly and eloquently are the fundamentals of communications. So thumbs up Ravi S. Iyer...😊😊😊😊"
----