Some old pics of me (Ravi S. Iyer)

Over the past few days I have been working on a quick conversion of a hastily written part autobiography (main work was done in 2013), into a self-published ebook and paperback book. This hastily written part autobiography covers my childhood, education, working life and turn to spiritual while working. It covers my life till I retire from commercial work in 2002 (at around 40 yrs of age) and leave for Puttaparthi to start full-time spiritual aspirant life in ashram environment. Here's a post with the 2013 manuscript work released on Internet in 2016 in PDF and Word document format: http://ravisiyer.blogspot.com/2016/06/an-indian-software-techies-my-material.html.

In this conversion of above mentioned manuscript into proper ebook and papeback book, I am only making superficial changes without adding significant new descriptive content. I would like to add content for some topics like my USA trips but I have decided to postpone that to a future edition. Now I want to use the manuscript as a low-hanging fruit to create a proper ebook and paperback book version of it, and move on to some other things that are on my plate.

But I have decided to add some photographs to this part autobiography. I was not into taking pics during those days. So I don't have photos of those days that I have taken out of an interest to capture my life then in pics. But I have some documents with my pics on them. I have decided to share that with the document context info. but with sensitive information masked out.

While these pics will go into my book, I thought I should also share them with readers here, and so they are given below. From a life documentation point of view, I have decided to include my birth certificates too in my part auto-bio book, and so have included those pics below. 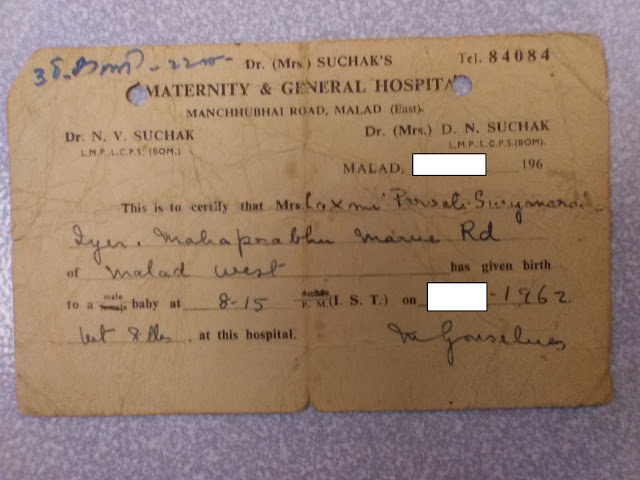 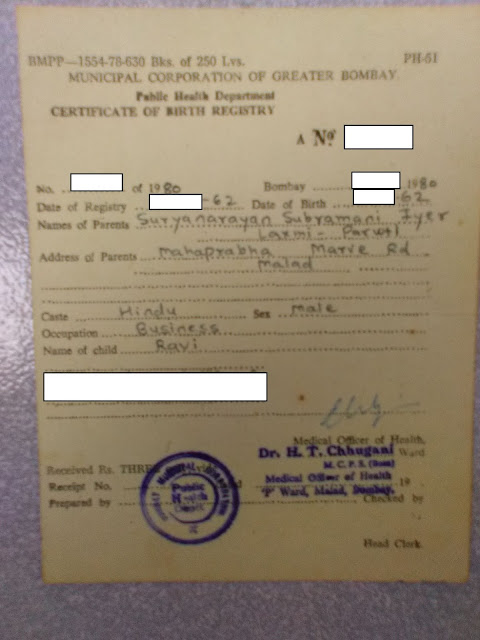 Above pics are my birth certificates. The second one is the official Bombay Municipal Corporation certificate obtained in 1980, when I was 18 years old, probably because I may have needed it for applying for some education programs and/or jobs. 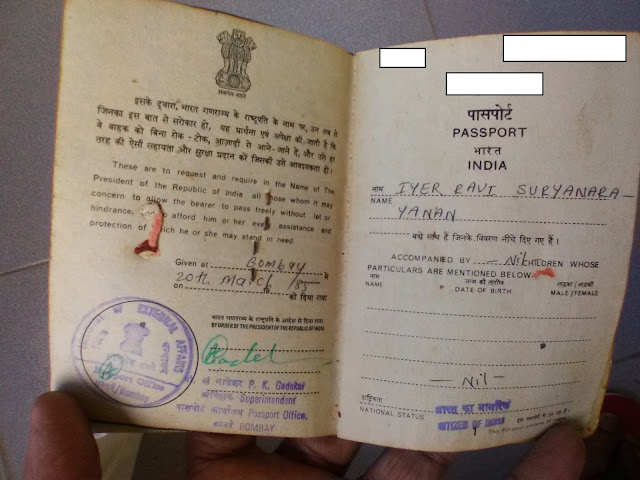 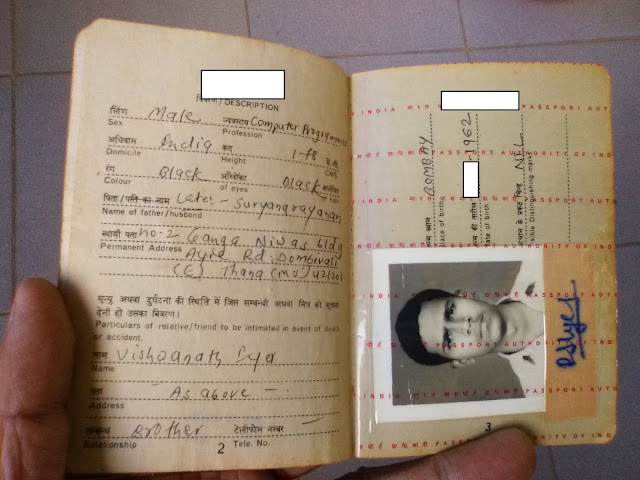 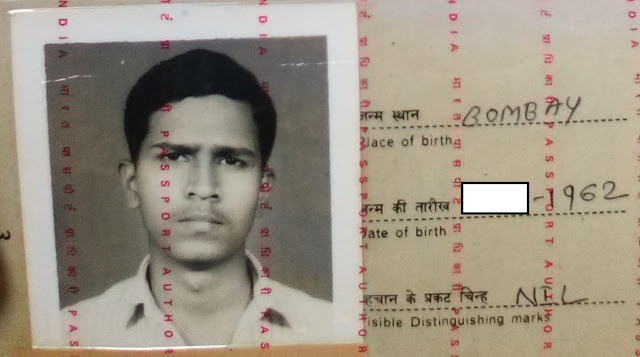 Above pics are from my first passport made in 1985. I think I was around 22 yrs old (running 23) when my above passport pic was taken. My profession is correctly stated as computer programmer. 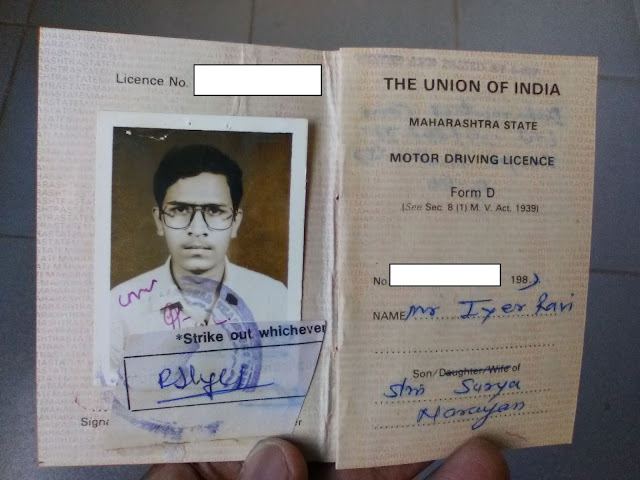 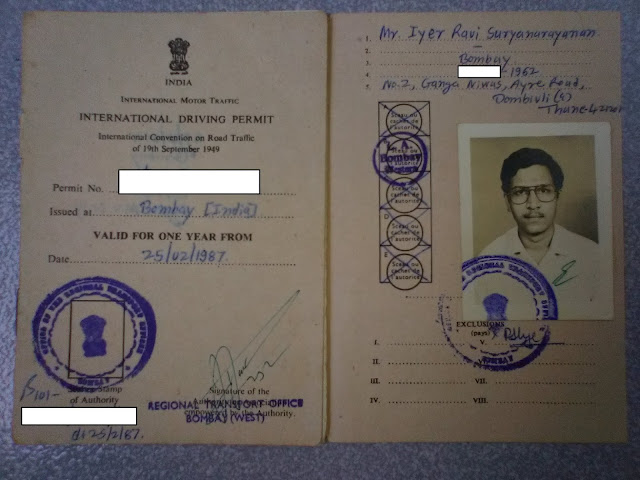 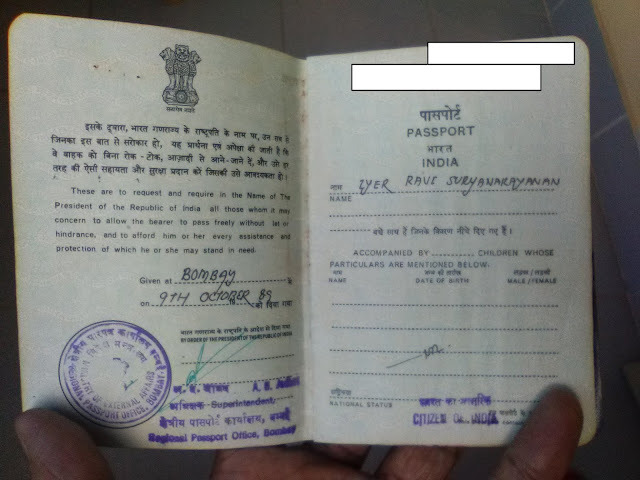 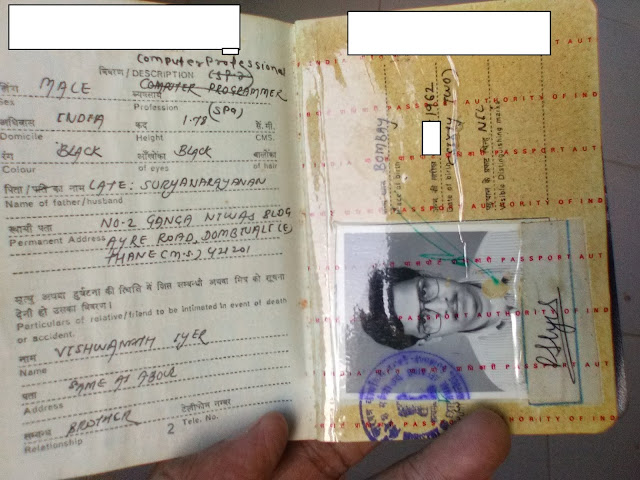 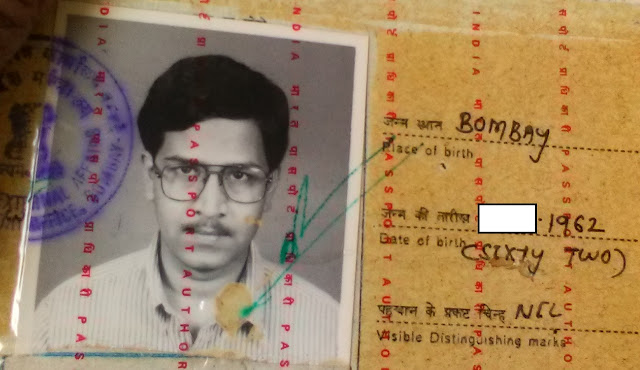 Above pics are from my second passport made in 1989. I think I was around 26 yrs old (running 27) when my above passport pic was taken. My profession by then was higher up the software development ladder than programmer - I was an analyst and a designer as well as a project leader. So the initial entry of computer programmer was corrected to computer professional. 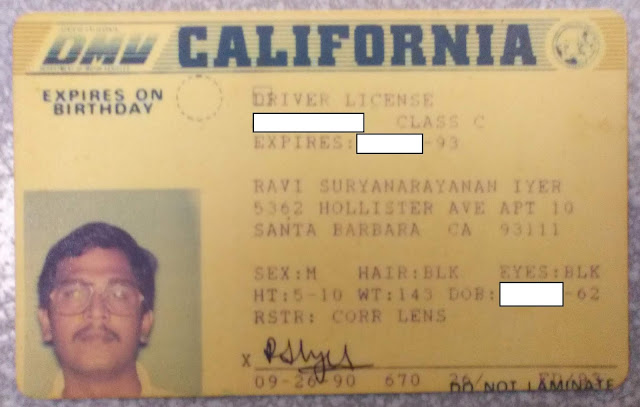 Above pic is my California, USA driving license. I was around 28 yrs old when my above pic was taken. 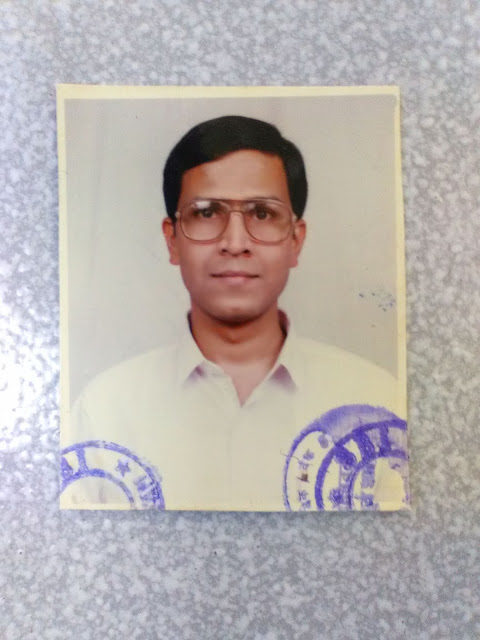 In response to a comment, "You should have become a film star. 😊", I (Ravi) wrote (slightly edited):
Ha! Ha! Bro. --Name-snipped--, your comment has made my day! Perhaps I could have become a villain or a nerdy side-kick of the hero.

To be honest, as I was going through the pics and laughing at how this mind-body complex was in its earlier years, I was struck by my first passport pic. It shows a frowning me, perhaps with some shades of even anger. I was reminded of the 1980 Hindi movie (which I don't think I saw but had known about): Albert Pinto Ko Gussa Kyoon Aata Hai (Why does Albert Pinto get angry), https://en.wikipedia.org/wiki/Albert_Pinto_Ko_Gussa_Kyoon_Aata_Hai, starring one of the great Hindi film actors of my days - Naseeruddin Shah as the angry young man.

So perhaps I could have starred as the main character in a movie: Ravi Iyer Ko Gussa Kyoon Aata Hai :-). But I am sure it would have bombed at the Box Office!
----

In response to a comment, "I think I look angry in some of my pictures too!", I (Ravi) wrote:
There is a lot of injustice in the world that a young person can easily get angry about. I think life taught me that getting angry about all the injustices in the world, including perceived injustice to myself, only hurt myself. Some anger is natural and perhaps is necessary to survive. But anger that is felt so deeply and for so long that it etches its mark on one's face is not good for one's own well being, IMHO. Better to work hard to resolve one's own problems, and while doing that, do what is feasible given one's situation, to help others, without getting all worked up at injustice that one cannot help solve.

People in political space, and in public space in general, are different in the sense that their voice carries weight. So them getting angry and opining about it publicly helps as others get alerted to the issues and may help resolve it.
----

In response to a comment, "You certainly look like such a deep thinker! And that you are!", I (Ravi) wrote (slightly edited):
Yes, --name-snipped--, I think you got it spot-on. Over the years, I have often been advised by relatives (including my mom), friends and well wishers (including some of my Doctors), who were concerned about health issues I was having, to think less :-).
----

In response to comment on my first passport pic, "Nice to see a handwritten passport Sir :) Most in my generation would not have even comprehended the existence of one. Thank you for sharing :)", I (Ravi) wrote (slightly edited):
Thanks for your comment. I had not seen this angle of it, though I knew that such pics could have other angles for readers than the original angle with which I shared it. ... This comment of yours encourages me to share more pics in my part auto bio (and on social media). Thanks.
----

In response to another comment, I (Ravi) wrote (slightly edited):
Well --name-snipped--, I have captured my view of some events that you have mentioned but NOT ALL, in some blog posts of mine. The part auto-bio (till 40 yrs of age) is a very hastily written one and so does not typically cover larger scale perspectives like you have mentioned above. It is more of an individual life view and the immediate environment impacts on it. ... Ideally, I would like to make it a much better memoir, perhaps drawing from some blog posts that I have made on larger aspects like what you mentioned. But that will take a lot of time which I cannot spare now as I have some other things on my plate. So I have decided to simply add some more documentation (like these pics) to the hastily written part auto bio (mainly done in 2013), and do some cleanup from a quick review of it, and then publish it as an ebook and paperback book. I think it may have value even in this hastily written form to some spiritual aspirants who now are in the shoes that I was in when I was in my twenties and thirties. That is the main objective of publishing this hastily written part auto bio, in the near future. As I said earlier, maybe some years down the line I may revisit this part auto bio and revise it significantly, and add some future years content as well. Thanks.
----
======================================================= 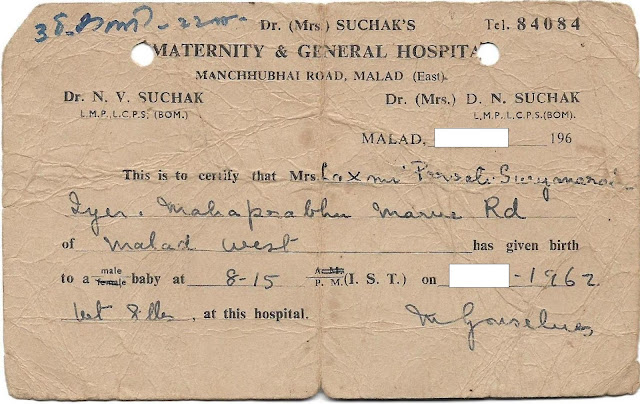 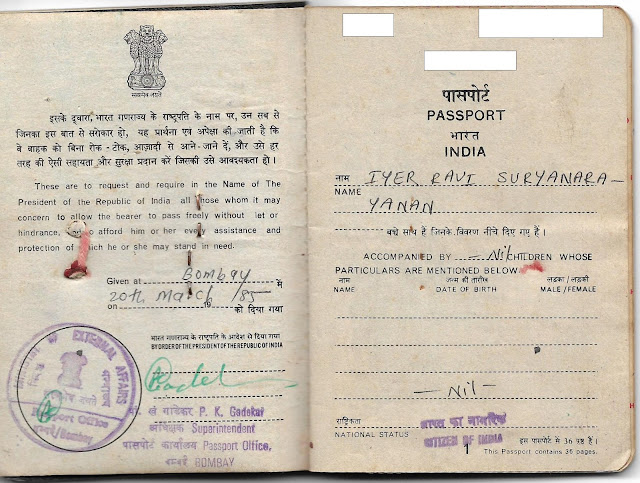 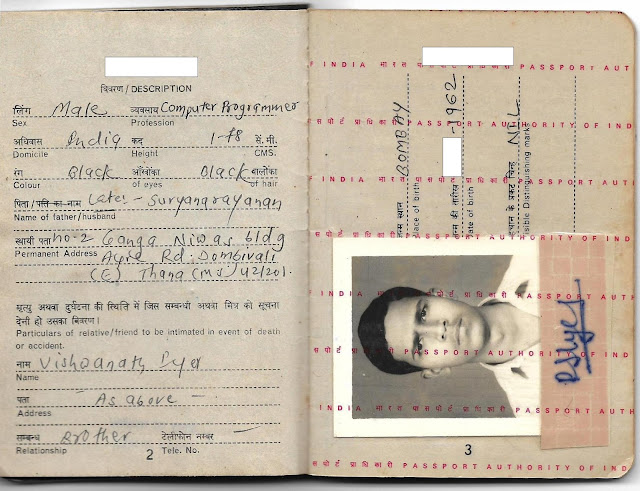 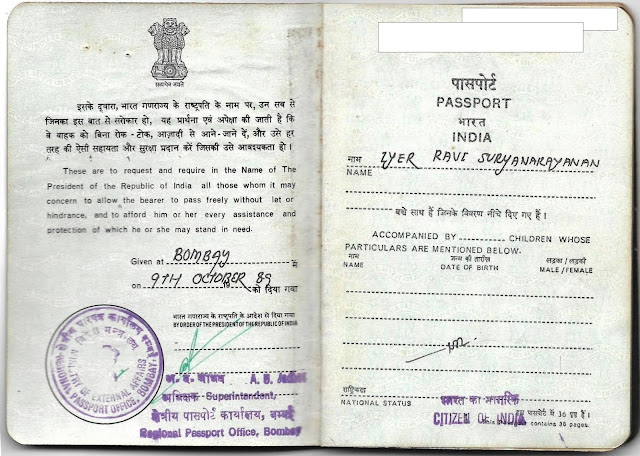 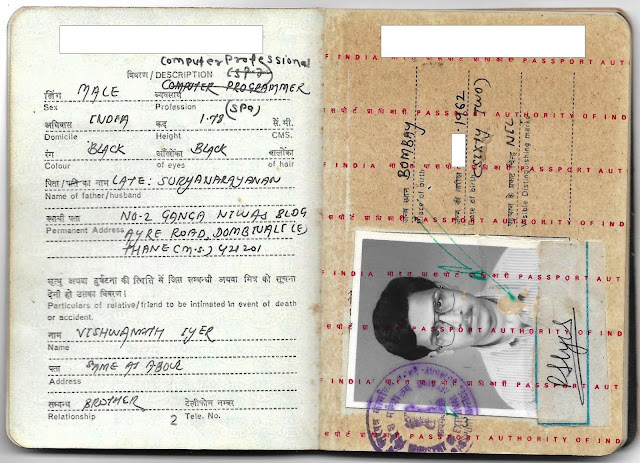 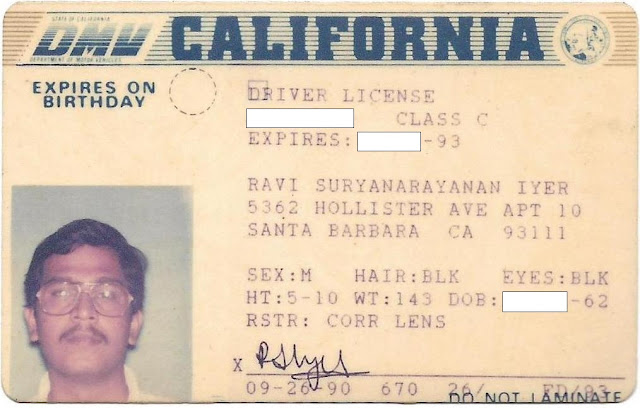 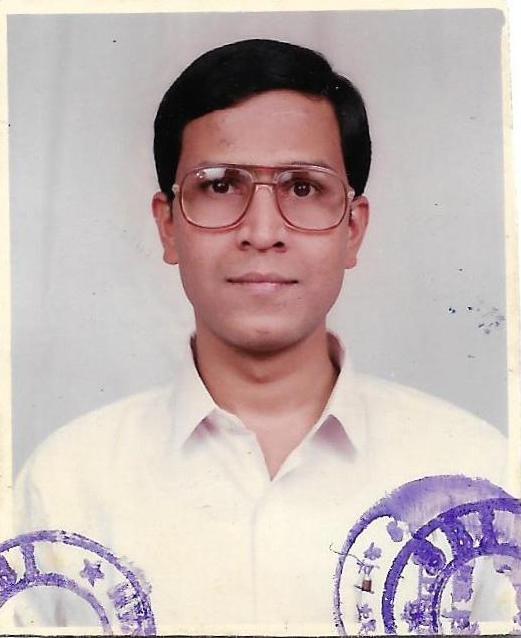