About creation, or more specifically, the idea of being created (identification with ego) and (idea of) being separate from God 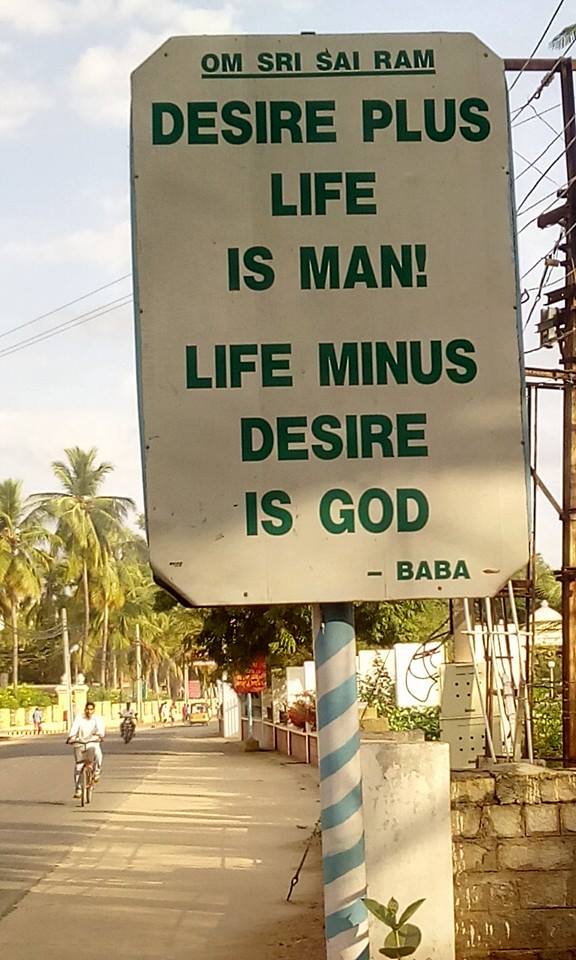 My understanding of Hindu scriptural view on these matters and which I think Sai Baba too endorsed, is that DESIRE is the ROOT cause of man/woman being deluded that he/she is separated from eternal & unchanging Brahman/Awareness. Karma is of course said to be another big factor in life. However, if a person has become DESIRELESS and focused on Awareness, the Karma will be gone through without much impact on the person.

They say that DESIRE is the main cause of even re-birth. The spirit-body/sukshma-sharira, after death of the earlier body, hankers after some things of the material world, and so is propelled to another birth, to satisfy that hankering. The spirit NEEDS A PHYSICAL BODY to fulfill its hankering! Now that is a key point of Hindu scripture, and that is why Hindus (and perhaps Buddhists & Jains) fear some spirits with bad desires (evil spirits) attempting to even enter into already living bodies (besides taking birth in a new body/baby's body).

While in the new birth the spirit-body/sukshma-sharira also has to endure its karmic debts of previous births.

But to become DESIRELESS is very, very difficult for most people. Thoughts and desires rush in to the mind that is trying to empty and remove itself, and people get enmeshed in Maya. Therefore the Dvaita (duality philosophy) teachers of Hinduism, which I think blends well with worship & adoration aspects of other religions like Christianity and Islam, teach people to fill themselves with DESIRE for God (God seen as separate from themselves typically, as an Ishta Devata (favourite God) like Krishna, Rama, Shiva figures, or the figure of Christ (son of God)). Such Dvaita devotees among Hindus VASTLY OUTNUMBER Advaita follower Hindus.

My view based on observation of Sathya Sai Baba during His darshan in Sai Kulwant Hall over the years, is that he understood that many of His devotees did not want to or felt uncomfortable with His Advaita teachings, and preferred to be in duality mode viewing Him as God in a separate physical body and themselves as devotee/Bhakta in separate physical body. They prefer to use paths of thinking of him and surrendering to him and doing service activities dedicated to him, rather than attempt to achieve DESIRELESS and THOUGHTLESS state of mind to experience self-realization. I think, like in the general case of Hindus, Sathya Sai devotees of Dvaita type VASTLY OUTNUMBER Advaita type Sathya Sai devotees.
--------------

Ravi S. Iyer Thanks [name-snipped] for your response. On the getting rid of the ego part (face the devil, as you said), I think what you are saying is in line with Bhagavan's discourses that I heard LIVE in Prasanthi Nilayam. BTW I use the words LIVE in Prasanthi Nilayam to clarify that I am basing my comments on UNEDITED by any text/audio editors discourses of Swami, and that I was part of the audience that Swami was addressing. It has been my observation that Swami would, many times, tailor his discourses for the audience he was addressing.

Swami would hammer away on EGO, and in Prasanthi Nilayam system, EGO was the favourite DEVIL :-). Administrators would also love to use it to suppress DISSENT and make subordinates listen to their orders without murmur :-). The subordinates would feel that the administrator suffers from EGO more than they, but could not say so to the administrator :-). The Telugu/Sanskrit word that Swami would use for EGO, IMHO, in his discourses typically was Ahamkaar though he would also use the English EGO word, at times, if I recall correctly.

Regarding the desire related part of your comment: In my previous comment I limited myself to desire in the context of life today, as against primordial desire. I mean, based on Swami's teachings/revelations, I believe that almost all of us Sai devotees (and almost all of others too) have had many, many (countless) previous births, and it is desires that have been the key aspect of our many, many previous lives and which have led us to take this life.

I have only some Hindu scripture reading exposure to the primordial desire part, and some of this Hindu scripture part has been endorsed by Swami. But I do not have a good understanding of it as of now.

Some extracts from Bhagavan's discourses on it:

From http://www.sathyasai.org/discour/2007/d071226.pdf:
What is Brahman? “I”. The Brahman neither is born nor has ‘death’. That is the only Truth; other events come and go. For example, I have willed to create this chain (Swami created a gold chain with His divine hand). This has been created by My Divine Will. It was not there earlier. Thus, all things and beings in this world are born out of sankalpa (will). Hence divine Sankalpa is the cause for all creation.

In addition, maya (illusion) also plays its role. When maya and Truth come together, creation takes place. Without maya, there can be no creation. The maya is like a shadow to a human being. But this shadow deludes us. At sunrise, our shadow is long. As the sun gradually rises, the shadow falls under our feet at mid-day. Thus, the shadow grows and shrinks. We should not therefore mistake the shadow as our basis.
-----

From http://www.sssbpt.info/ssspeaks/volume32/sss32p1-12.pdf:
The entire creation has divine origin, and the Creator is God. He willed: “Ekoham Bahusyam (I am alone, let Me be many),” and the creation manifested by His Will. Srishti (creation) has its origin from Parameshti (supreme power). Samashti (society) is a limb of srishti. Similarly, vyashti (individual) is a limb of samashti. Without srishti, samashti has no existence, and without samashti, there can be no vyashti.
----

From http://askbaba.helloyou.ch/discourses/d1974/d19741016-1.html
The Upanishaths (integral wisdom of Vedhas) declare, "Ekoham bahusyam" - "I am one, let me become many," willed God; and God became all this, in response to that divine desire, the primal urge.
-----

Ravi: The above extracts from Bhagavan's discourses CLEARLY ENDORSE the Upanishad view of primordial DIVINE DESIRE as the primordial cause of creation. Ekoham Bahusyam. The ONE WILLED that it should be MANY.

As far as I know the Upanishads do not get into further details like who was the first man and first woman (like Adam & Eve in Old Testament Jewish/Christian scripture which I think is also accepted by Islam). However, other Hindu scripture like the Vedic samhitas and puranas, have accounts of Hiranyagarbha as the specific way in which creation started. From https://en.wikipedia.org/wiki/Hiranyagarbha, "Hiraṇyagarbha (Devanagari: हिरण्यगर्भः ; literally the 'golden womb' or 'golden egg', poetically rendered 'universal germ') is the source of the creation of the Universe or the manifested cosmos in Hindu philosophy, it finds mention in one hymn of the Ṛigveda (RV 10.121), known as the 'Hiraṇyagarbha Sūkta', suggesting a single creator deity(verse 8: yo deveṣv ādhi devā eka āsīt, Griffith:"He is the God of gods, and none beside him."), in the hymn identified as Prajāpati. The concept of the golden womb is again mentioned in Viswakarma suktha Rg 10-82."
-----

BTW as I was browsing the net to get some Sathya Sai quotes on "Ekoham Bahusyam", I came across this very interesting document, in the context of I am I teaching of Bhagavan, http://www.sathyasai.org/files2010/I-Am-I.doc, titled "I am I" by Sri Sathya Sai World Foundation, seemingly dated 2010, having discourse extracts of Bhagavan related to I am I teaching of his.
Posted by Ravi S. Iyer at 4:54 PM